You are watching The Great Alaskan Race (2019) 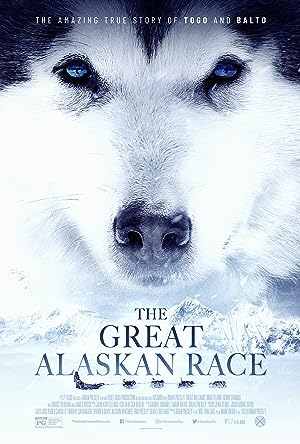 In 1925, a group of brave mushers travel 700 miles to save the small children of Nome, Alaska from a deadly epidemic.

Watch Togo, or for that matter Balto and you'd think the dogs were conscious of their mission. A touching film of what parents will do to save their kids. I was deeply touched with this warm film. The sled dogs in this marathon in fact were not conscious of carrying serum and were not performing any different than had they been on a long distance competitive race. Terrible acting….

Oh, and sure it was shot in Colorado, one reviewer downgraded the film to a very low score for that.

Then read the title again in case you didn't quite get it the first time… great movie… This may not be Disney's Togo, but–it is actually just as good or…

Lastly a couple of the professional reviewers denigrated the issue of faith in this film. I really enjoyed this film. Infinitely better all around and IMO much more historically accurate. It's not filmed in the Hollywood glossy style but it tells the story it intends. Do yourselves a favor and just watch Disney's Togo. but couldn't get into it at all. Its not a commercial film but it tells the story very well. Horrible acting, filmed in Colorado instead of Alaska, no real Inuit actors. One less star because some of the story comes across a little disjointed.

1/10 Pros: Absolutely gorgeous score. Excellent acting by Treat Williams. ok, so the budget was probably constrained making that a necessity. This movie is based on true events that happened in Nome, AK at the start of the 20th Century. Another captivating angle to this incredible story. The story is more focused on the people than the dogs, which is a nice change (and I love dogs). A very warm, heartfelt story and it's family friendly – a nice bonus! His own daughter was one of the sick children, which was a very compelling motivation for Mr. Shepard to get the serum back to Nome expeditiously. It was great to hear some of the details I'd not known, such as Togo being the lead dog that travelled the greatest distance of all the teams that traversed the distance and extreme temperatures to get the serum to Nome. I am an atheist but that a guy, near 100 years ago, out alone in Alaska at the every edge of survival would be praying isn't offensive to me. All of the films about this historic true event are very good, including this version. come on. On our local NPR station there was an interview with a historian who indicated that “Great Alaskan Race”, while lower budget, was much more accurate, than the Disney behemoth, 'Togo.” Just watch Togo with Willem Dafoe. Maybe a good Hallmark movie when nothing else is on. I expect they put cheap knockoffs like this out because they know people will get confused and pay to watch the wrong movie. This film provides a warm and interesting reflection of the man who contributed 80% of the rescue effort, Leonard Shepard.

Disney in my opinion has a extremely damaging habit of anthropomorphizing animals. What these dogs are, are amazing athletes, amazing social group/pack on a sled team with driver, and working in conditions that are both extreme and beautiful. The background music is perfectly fit in the story. I recently watched the movie Togo and thought that it was pretty good, which is what you would expect from a Disney film. Will watch it again I loved Balto but this movie gives you even more of the back story. For a lifelong Alaskan who grew up in mushing circles, this movie was a disappointment. Literally just read the title…

Leonhard Seppala met and married Constance YEARS before this movie took place, and Sigrid was their daughter. But Togo while having some exteriors in Alaska, is also a LOT of blue screen, with special effects on the dogs faces — that is much more problematic in my view. Poor filming, terrible acting by Presley (among others), huge historical inaccuracies. The acting was good and the scenery beautiful and it is based on a true story. What movie started in production first ? Seppala never had an Inuit wife. Superficial coverage, with jarring incongruities (CO landscape, stone cabin, plastic sled runners, a light-colored Togo, etc), left me wishing Hollywood would depict Alaska accurately by filming on location, or at least consulting for authenticity. Watched TOGO last week… The historic photos at the end were the best part, however, credit given to all 20 mushers by name would have been appreciated. I knew how it ended but I was still on the edge of my seat.