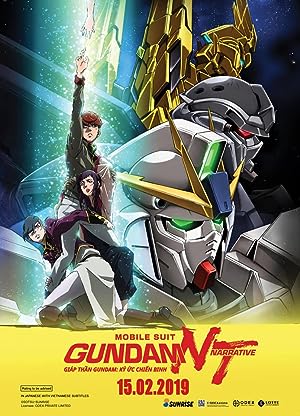 U.C. 0097, one year after the opening of "Laplace's Box". Despite the revelation of the Universal Century Charter that acknowledges the existence and rights of Newtypes, the framework of the world has not been greatly altered. The conflict later dubbed the "Laplace Incident" is thought to have ended with the downfall of the Neo Zeon remnants known as the Sleeves. In its final battle, two full psycho-frame mobile suits displayed power beyond human understanding. The white unicorn and the black lion were sealed away to remove this danger from people's consciousness, and they should now be completely forgotten. However, the RX-0 Unicorn Gundam 03, which disappeared two years earlier, is now about to show itself in the Earth Sphere once more. A golden phoenix… named Phenex.

A really good movie, BUT you have to be a long time fan to appreciate it. While the war continues, it tells the story of friendship and the emphasis of betrayal and the focus on psycho-frame technologies as its main plot line.

The story overall feels very light in terms of the scope of what the actual plot was supposed to be really about for Gundam fans.

For a long time fan like me, this is perfect because the story just continued from where last we left UC timeline in the Unicorn Gundam series. Gundam NT takes place a year after the ending of Gundam Unicorn.

Mecha design is also cool, although it only refurbished previous mecha design. It had great fights, interesting mecha designs and decent to shallow characters.

What the story lacks is the character building itself as they easily ward off the protagonist as a “normal” who just has most of his live being coiled to the plot of the series. The only new mecha design I see is only Gundam Narrative, but even then you can see that it's just a mash up of Unicorn and Nu. Other mechas are just previous design with some new add on to sell new toys.

It can be watched alone, too, but the best way to watch it, is as an aftermath movie to Unicorn.

In Gundam NT we have a tone of references, a lot of fan service to UC, some great fights, ridiculous overpowered mechas (although I loved “Phoenix”) and decent to shallow characters, in a story incredibly thin. This movie starts off a little slow and confusing but eventually slowly revealed and quickly made sense for those who watched Unicorn Gundam. It lacks Gundam mecha visuals, there aren't that many variety of Gundams in this movie and features mainly 5 mobile suits. And the movie really just assumes you already know who's who. For non-Gundam fans the story seems very bitterly sweet.

The narrative overall feels zen as its complex and confusing beginning makes it hard to make out the ending, and straightforward and easy to understand at the end makes it simple to line out the sequence of events that lead to the ending. The main protagonists seems very disconnected even though they were made out to be some kind of love triangle but never evolved to anything more than their own connection with each other. And let me remind you that Unicorn was a very perplexed and heavy story, with a tone of references and fan service to Universal Century stories.

Overall a superb movie, with a HUGE CAVEAT that you have to know the history of the world the story took place. If you're just a casual audience who didn't know the history of the Gundam Universal Century timeline, this movie will get confusing really fast, as tou won't understand which faction is which and who you want to root for. But for newcomers, I would understand if you don't like it because there's very little exposition on the state of the world the story takes place, and hence the character motivation becomes “blurry”

The main plot in itself, in the most basic form is a triangle love story, boy likes girl, the other girl gets jealous, but in a midst of war, jealousy can lead to some dire consequences. And then forget both of them and move on. That is why I only give it a 6/10, because in the end, this movie cannot stand on its own. It make me feel disconnected to their friendship and the story ending. My suggestion, watch other Gundam shows from the Universal Century timeline, at the very minimum watch the Unicorn Gundam series BEFORE WATCHING THIS MOVIE.

But if what you're looking for here is only mecha on Mecha action, then you're in for a treat, because this movie has PLENTY! The animation is fluid and really capture the movement of the battle, while the OST perfectly accompanying the dynamics of the battle, I personally LOVED the first action sequence where Phenex first shown on screen. This movie retains its core of the Universal Century as it continues to explore war and politics. Animation overall is pretty good with some really good animation sequence in the first main Gundam fight.